SK in hot pursuit of Hyundai for No. 2 spot in chaebol list: report

SK Group is fast catching up with South Korea’s second-largest conglomerate Hyundai Motor Group, even as Samsung Group continued to maintain the top spot last year with a sizable lead over them, according to a report on Wednesday. 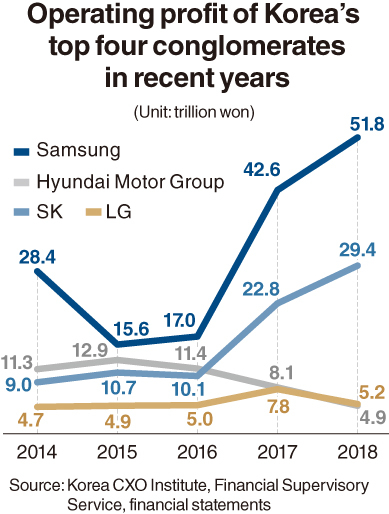 Fair value represents the estimated worth of various assets and liabilities that must be listed in a company’s financial statement.

SK Group, in the meantime, has been closing in on Hyundai Motor Group at a fast pace. In 2015, its fair value was 152 trillion won, which soared to 217 trillion won last year.

The report noted that SK Group could surpass Hyundai Motor Group within a couple of years if it grows at the current pace.

The semiconductor unit of SK Group has been one of its most lucrative subsidiaries, the report explained.

In 2017, the gap between the net asset value of Hyundai Motor’s automobile unit and SK Group’s semiconductor unit was 38.5 trillion won, but it reduced to 8.8 trillion won in 2019.

In 2018, the operating profit of SK Group continued its upward trend to post 29 trillion won.

Meanwhile, the report predicted LG Group which is in fourth place will retain its position, unless there are significant changes in its business profile.