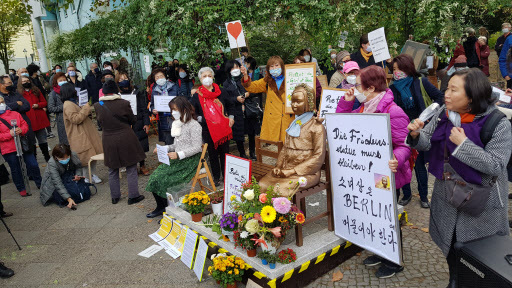 [1] A legal battle to protect a statue erected in the German capital commemorating the victims of Japan’s wartime sexual slavery began on Monday as Koreans based in Germany sought to invalidate a Berlin district office’s order to remove the statue.

[2] Korea Verband, a Germany-based civic organization with Korean ties, were set to file for an injunction in protest against the central Mitte district’s order to remove the statue, which was installed late last month with the city authorities’ approval.

[3] Funded by the Korean Council for Justice and Remembrance for the Issues of Military Sexual Slavery by Japan, Korea Verband set up the statue, formally called the Statue of Peace, in a busy area of Berlin’s Mitte district near the Japanese Embassy to raise awareness about wartime sexual enslavement.

[4] It was the third such statue installed in Germany and the first to stand in a public space.

[1] Hit K-pop act BTS has come under fire in China for a remark about the Korean War, according to a Chinese news outlet.

[2] BTS recently received the General James A. Van Fleet Award from the Korea Society, a US-based nonprofit organization. The award, named after a US commander who fought in the Korean War (1950-1953), is given to South Korean and US nationals who have strengthened the ties between the two nations.

[3] In a video clip released by the organization on Wednesday, BTS member RM made an acceptance speech in which he said, “We will always remember the history of pain that our two nations share together and sacrifices of countless men and women.”

[4] According to the Global Times, under the Chinese Communist Party’s People’s Daily newspaper, the speech enraged Chinese online users because it reflects a “one-sided attitude.”

[5] Many Chinese deem the remark inconsiderate as China participated in the Korean War to assist North Korea and fought against South Korea and the US.